At the time I originally wrote this post, the Garmin FR620 and FR220 models were just about ready to ship out to stores everywhere.  Since then, I ended up purchasing the Forerunner 220, but I did get to play with the 620 at a local running store event where Garmin representatives were demonstrating its capabilities.

“This article contains links to some recommended products. Please note, as an Amazon Associate I may earn from qualifying purchases.”

I have to say, the Forerunner 620 is quite impressive. For me, the watch sync’ed with the satellite very fast, although the first time it was a little slower, most likely because it was learning where it was in relation to the satellite.  After that initial sync, it connected within 10-15 seconds on average which is a lot better than the Garmin 110’s and some of the 200′ series watches which usually took a few seconds more.

While I believe a lot of the features are “cool,”  I am not  sure I personally would use most of them that often. This watch is feature rich, but these features are really targeted for the most serious of runners.  If I had more time in a day to analyze the data, then I would certainly consider this watch.

Ultimately, the decision comes down to whether you are someone who is really into analyzing data and want some cool things to look at or track or if you’re someone who wants a subset of features at a cheaper price point.  If you fall into the first category, the Forerunner 620 is for you.  If not, then go with a cheaper model with fewer features.

The 620 comes in Black/Blue or White/Orange colors. 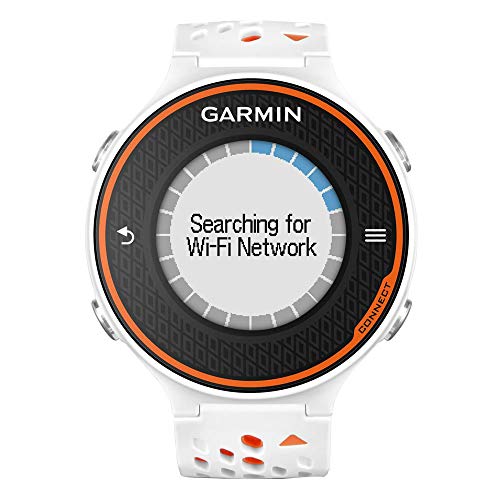 The only other thing I should mention is that, when I looked at this watch, the version the rep shared with me was still an early release. It was expected to have additional firmware releases to improve the functionality of the watch and stability.  I have not reviewed it since. However, a runner in my running club owns one and reports that they’ve updated the watch once, and that runner has not yet had any issues.

In its marketing campaign, Garmin equates the watch to having your own running coach.  As a running coach myself, (and I admit, I am biased) that seems a little far fetched.  A watch is certainly not a replacement for a good coach. Regardless, as long as you’re realistic in your expectations, this is OK. It does have some really cool features.

Here are some of the features that make this a high end running watch worth seriously considering:

The Basic Features of the Forerunner 620

► Compare the Garmin 620 against other Garmin running watch models!

The Cool Features of the Forerunner 620

• Measure cadence – the number of steps per minute. It displays the total steps (right and left combined).

• Measure vertical oscillation – the bounce in your running motion. It displays the vertical motion of your torso, measured in centimeters.

• Measures ground contact time — the amount of time in each step that you spend on the ground while running. It is measured in milliseconds.

► Compare the Garmin 620 against other Garmin running watch models!